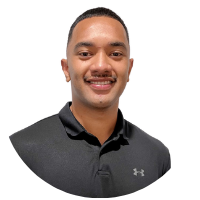 Born in the Tokelau Islands and raised in New Zealand, Visesio, or more commonly known as ‘Sio’, has always had a strong passion for helping people and seeing improvement in someone’s quality of life. As a youngster he was taught the traditional way of Sāmoan massage (fōfō) by his grandparents, this was his initial introduction to massage where his passion grew. It was this passion that led to a career in massage therapy.

Sio completed his Diploma in Remedial Massage Therapy at Q Academy in Brisbane in early 2021 and is eager and determined to put all his studies into practice. A netball player and coach, Sio has a special interest in sports based injuries, rehabilitation. He is wanting to pursue more study in becoming a Strength and Conditioning coach.